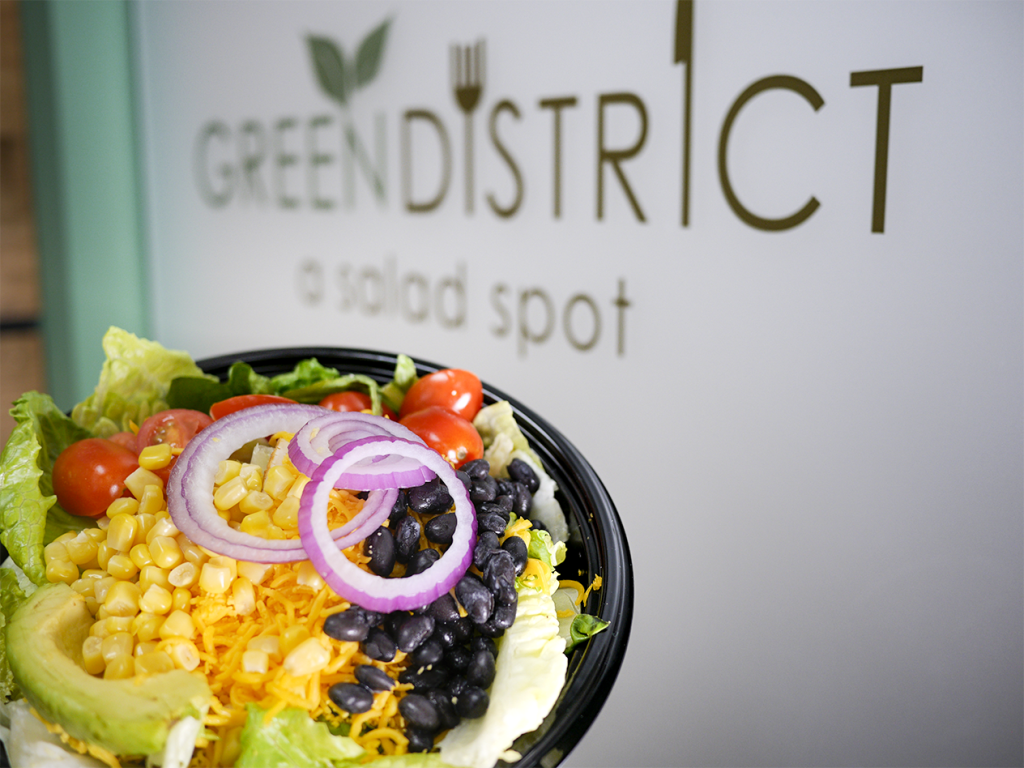 Green Salads opened its first Gourmet Chop Shop Salad location in St. Mathews, Louisville, Kentucky and the brand has never looked back since. The idea was started by three friends who used to coach and play soccer together, Jordan Doepke, Matt Petty and Chris Furlow.  The founders all felt strongly about eating healthy, loved salads, but never felt that there were viable options for them in most markets.

The three had realized that not only were there few places offering healthy options, but very few offered salads as the main course. The Green District founders came up with the brand and concept, a quick service restaurant where customers can choose from a selection of signature salads or build salads from a wide range of options provided in a trendy, cutting-edge atmosphere.

When a customer makes an order, the order will be prepared from freshly chopped ingredients. Customers can order a full course of salads. The serving may include a base with toppings, wraps, amongst other options. The price of each of the salads ranges between $5.99 and $9.99. If you need more toppings or dressings you can have them for 49 cents.

The Salad Franchise that Works.

After opening the first location in June 2017, the buzz it generated in the media and amongst the local community prompted the owners to start a second location in Louisville Downturn District in December of the same year. Green District Salads has continued to be popular with people looking for places they could get delicious healthy options. The countless positive reviews on platforms such as Yelp and Google reviews is proof of the viability of the business model and the concept.

The franchisor is now looking for new partners to expand into new territories across America. If you already have a health food store or an eatery, you can convert it into a Green District franchise. You can also start from scratch with training and support from the franchisor.

One of the benefits of starting a Green District Franchise is that you can have your own exclusive territory. The franchisor defines a territory as an area with a population of 50,000 people or an area of 5 kilometers radius.

The initial investment will range from $156,000 and $297,000 depending on several factors such as whether you already have a food store or you are starting from scratch. The initial investment covers things such as interior design improvements to match Green District’s Salad brand. Other costs include utility cost, training, and support, office expenses, insurance, and licenses.

The investment cost is relatively low given then opportunities for income it presents and also considering the increasing popularity of the concept. Customers can order as they wait or order online to have their meal delivered wherever they are. The franchisor believes this will provide more opportunities for franchisees since not many eateries have that option.

Franchisees can also expect to benefit from training and support which is covered in the initial investment. The franchisor will provide guidance based on their experience to ensure that franchisees can replicate the success of the business in their own exclusive territories.