(FS1) Franchise Series 1 – What is Franchising?

Franchising drives what we will call the entrepreneurial plane, taking businesses to a higher level, faster than ever. You will have a hard time driving down any city street, even in small towns, without passing at least one franchise. Franchising is so massive, that it is a part of just about any business line in existence today. When you’re looking at opening a business, opening a franchise should always be an option on the table. You should look into the benefits a franchise can offer you and how well it would fit with your business plans.  The first thing to learn as you explore franchising as a business option is understanding just what a franchise is and how it relates to you.

Where Did Franchising Come From?

Franchising isn’t something new to modern society, but has a history that stretches as far back as ancient China. From there, it was carried further across the world by European royals who wanted to keep control over their land while also exploring and conquering more.

Benjamin Franklin actually had a huge part in carrying franchising to what would become the United States. While we’re all taught about his inventions, we’re rarely, if ever, are taught that he had anything to do with franchising. On September 13th, 1731, Benjamin Franklin entered into the first ever franchise North America would see with business partner Thomas Whitmarsh. They called this relationship, “Co-partnership for Printing in Charlestown in South Carolina.” It was a printing shop. One of its tasks was printing The South Carolina Gazette as well as Franklin’s personal stories. Franklin later opened other franchises for this printer before the revolution.

To put it simply, franchising is when a franchisor (the owner of a business or party) grants an individual the privilege to use their business model, title, and reputation, to open a store of their own. When you open a franchise, you are subject to the system and processes of the franchiser, which can be a blessing or a block depending on an individual’s experience level. When you open a franchise, you are also subject to the decoration, details, and employee training model that has already been setup by the father of the franchise and company. That’s not to say you don’t own the store or can’t make individual differences, but as you receive help from the franchisor through finances, advertising, building, and training, you will also be representing that brand in the area, so you will have to follow their rules.

The best known benefit of franchising is that the franchisee (the person looking to start a business) will have all the support they need to start their store and get it off the ground. In exchange, the franchisee will usually be required to pay an initial fee and a continual fee known as royalties as they continue to use the brand name and operation model. 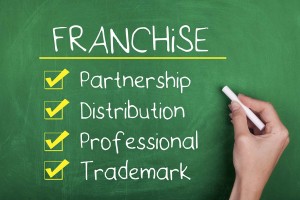 How Does Franchising Effect Modern Business?

According to the 2010 Franchise Business Economic Outlook by PricewaterhouseCoopers, business-format franchising projected the generation of more than 9.5 million jobs and the economic output of $8.6 billion—and that’s before including automotive dealers, gas stations, and beverage bottlers.

One of the best benefits you could ask for as a franchisor is to have your brand known for their consistency, dependability, and other awesome attributes. Franchises already have an established name, meaning if your consumers have heard of the brand, they already have an opinion, whether good or bad, and this can be your major draw when first opening. If you think that a business is not meant for franchising or there isn’t one out there, think again. More and more businesses are considering franchising as they find success in a singular location and the only thing that limits you is not your industry, but your creativity and your drive and there’s proof in that.

Read More in From Franchise Series 1:

Comments
Be the first to review this listing